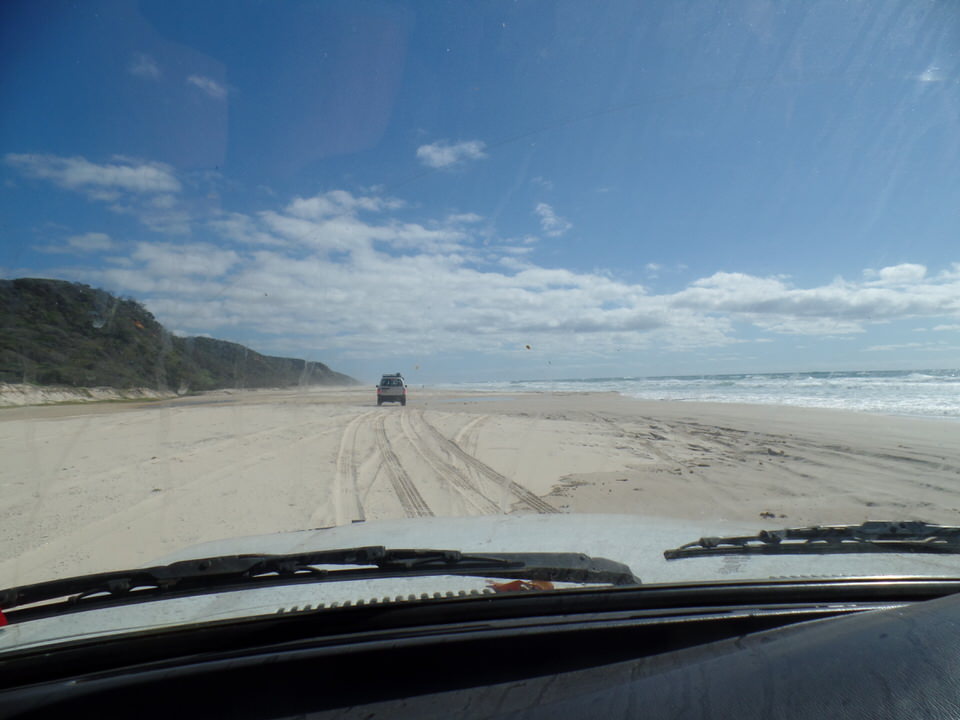 Fraser, I miss you already. I miss your natural beauty, your gentle breeze, your soft sand and your precious lakes. I miss how, while we are speeding on your beaches by four wheel drive, the waves scroll on the sand like little fingers made of foam. But lets start from the beginning: My trip to Fraser Island, the largest sand island in the world, turned out to be an awesome and unique experience. You get to drive these big cars, which can go on whatever ground: bumpy tracks in the forest, small rocks, water, deep sand. Well I didn’t, because I didn’t bring my drivers license to Australia – so keep in mind: Take yours on your travel, even if you are not thinking to use it.

When driving on the beach, they tell you to watch out for deep sand, small rivers, the waves washing up, people, dingos (a wild type of dog, who lives on the island and can be dangerous IF you are on your own) and even planes, who might land right besides you on the beach. You don’t know, how much fun the driving for all passengers is, when you haven’t done it yet! Even if – in the drivers position – you could tent to think, that you are loosing control of the vehicle sometimes. Just guide the steering wheel gently. Let the car work for you and don’t fight against it, because it will correct itself. Especially people in the very back should not be afraid to jump a little ;-). So seat belts on!! 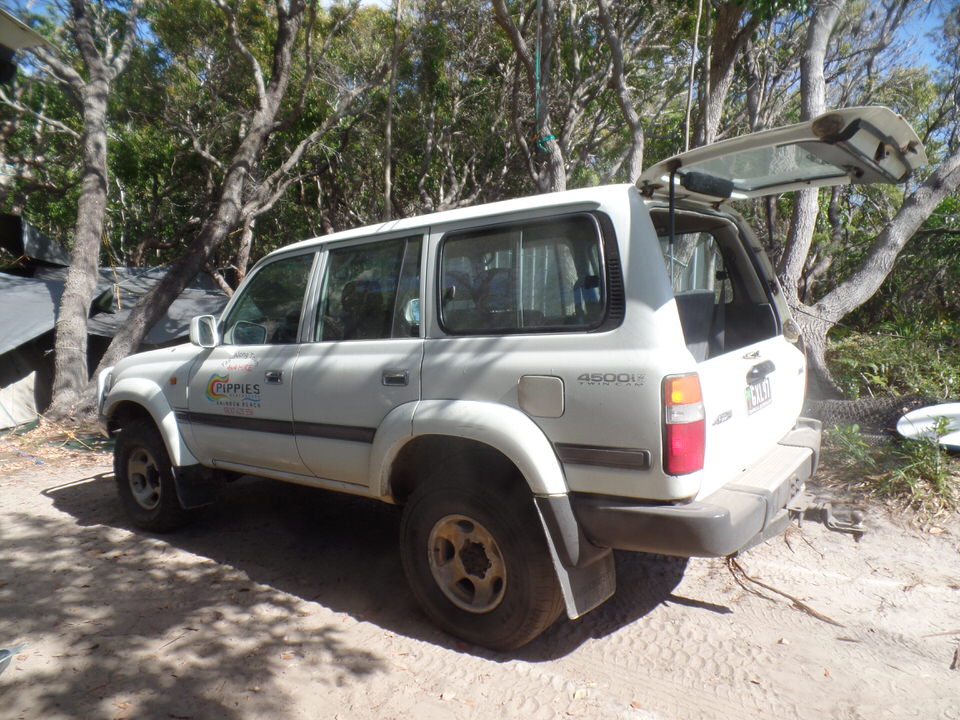 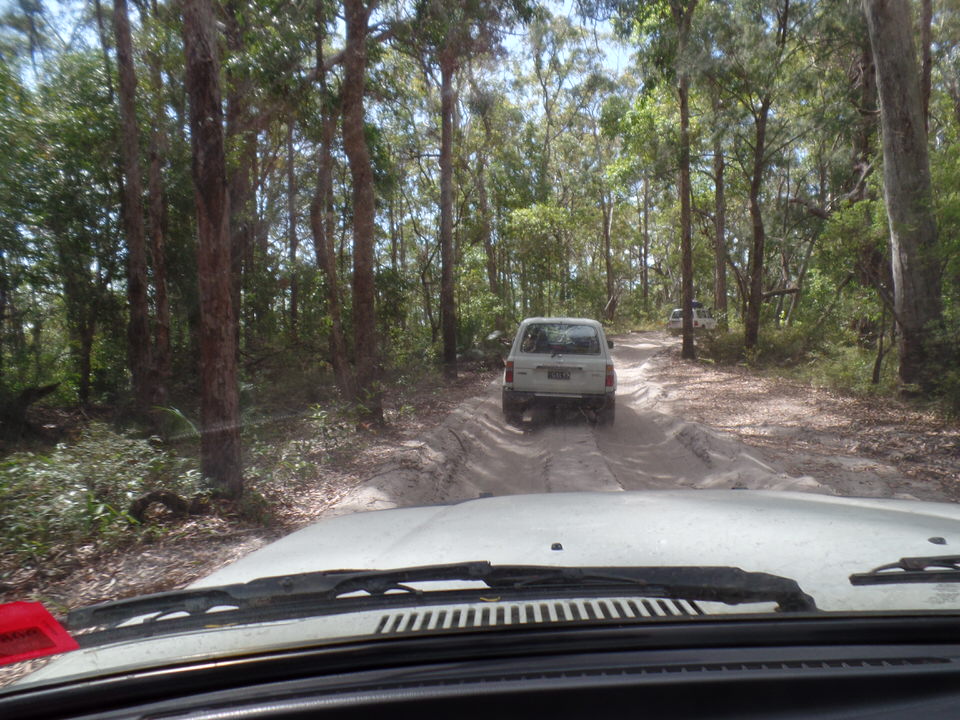 All in all sitting in a four wheel drive together is a great group experience, because it kind of feels like being on a roller coaster and it for sure strengthens the team spirit, when everybody is encouraging the driver. „I used to always lose in Mario Cart, but now I am actually gonna be a lot better“, says the Swedish girl Josefine, after NOT having hit a certain tree on one of those very narrow forest tracks. Everybody laughs. „You are doing a great job“, her friend Luisa assures. Just a few hours later it gets a bit more hectic in the girls only car though. Understandable, given that a thumb big bug was hiding between a seat and the upper part of the seat. Loud screaming, one girl jumping from her backseat almost to the front – the whole caravan needed to stop …

But its exactly those kind of life threatening situations and how you manage to solve them, what makes the group members come even closer to one another! 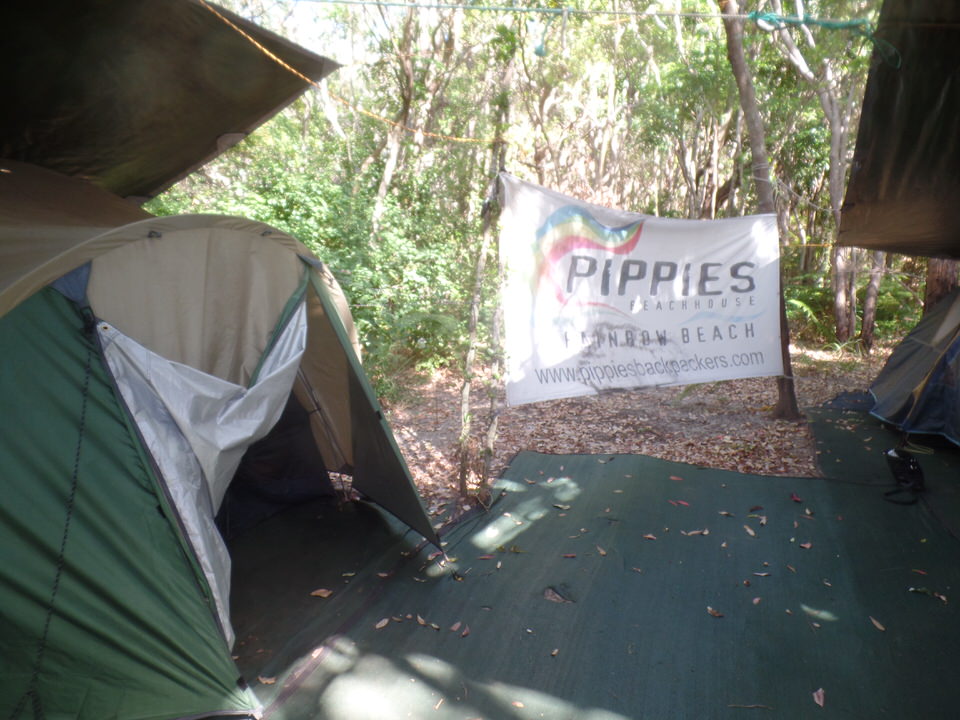 By the way, the first group task on a every Fraser Island tour departing from Pippies Hostel is a walk to the grocery store. You need to buy all the food, you are gonna prepare together, for the three days and two nights. Plus of course the alcohol you MIGHT need in the evenings, while sitting around the fireplace or laying on the beach, looking at an incredible sky full of bright stars. Shooting stars and other galaxies – above peaceful Fraser you see it all! And its exactly like in those planetariums, where they teach children about the universe. I just learned myself, that Australians look at our universe from another perspective, than Germans do. There point of orientation is the Southern Cross, instead of the polar star. So you are going to see some different star signs! 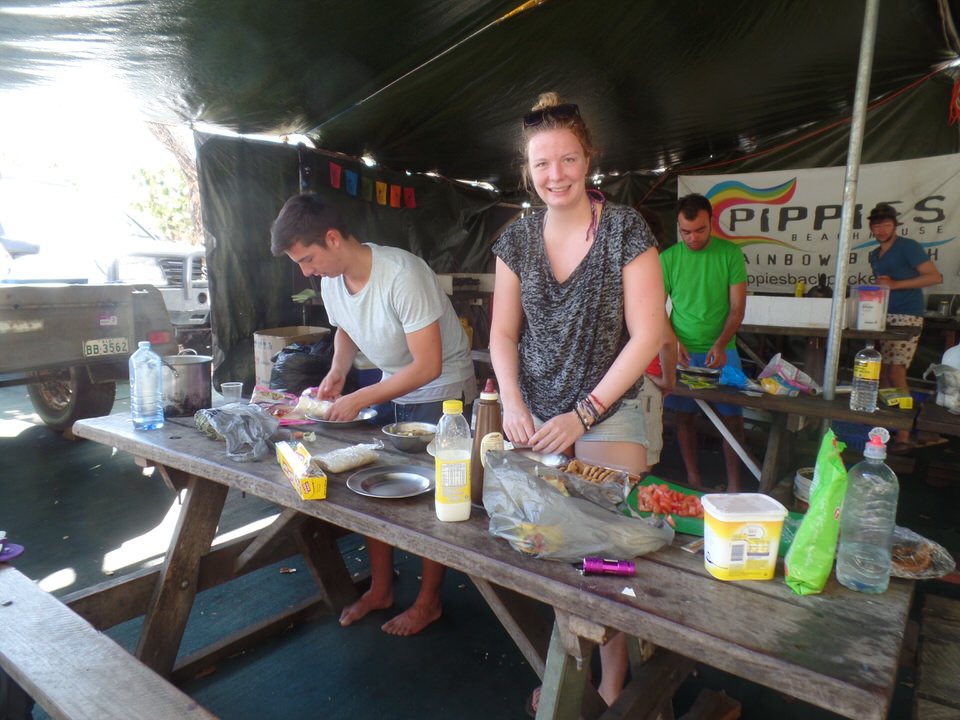 On Fraser Island you come closer to nature. It’s not only the fact, that you live on a campsite (with abnormal good bathrooms, tasty spring-/tab water, a fully equipped open kitchen area and a cozy fireplace), no its the whole „being outside the entire day“ and discovering new beautiful sights of the island each time you head out.

So what exactly did we see on Fraser Island?:

Lake Mac Kensey is one of the most beautiful sights on Fraser Island. Try to be there, when its not crowded. The light blue lake consists entirely of rainwater, so there is no sea life in it. The beautiful sand on the beach is the same as at the famous Whitehaven Beach on the Whitsundays. The water gets deeper gradually – the perfect place to play some water ball … 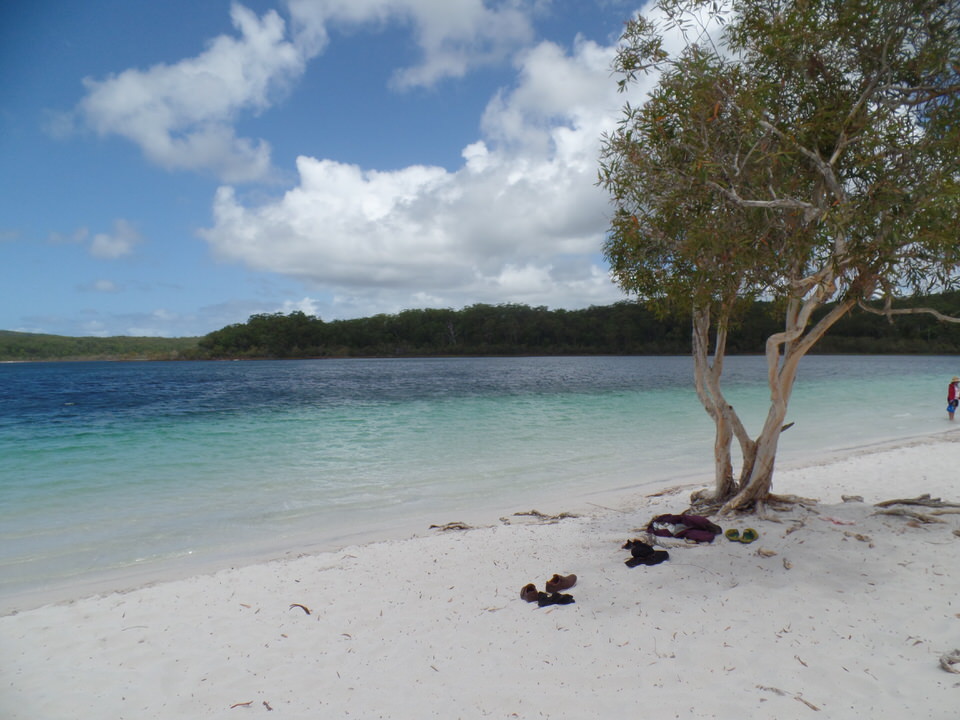 When indigenous people where living on Fraser Island, they would meet at Central Station. Nowadays visitors can read something about the history and development of the island on some information boards at this ancient gathering point. You also see pictures of the diverse wild life, that can be found here – from all kinds of birds to dingos. In the nearby woods there is a hollow tree, which is believed to be holy. By his thickness you can tell, that this giant tree is over three hundred years old. People say, that it brings bad luck to enter it. Even dingos will keep their distance. By the way: A spirit called Gary is said to be watching over Fraser. That all somehow reminds me of the movie Avatar. Have you seen that one? 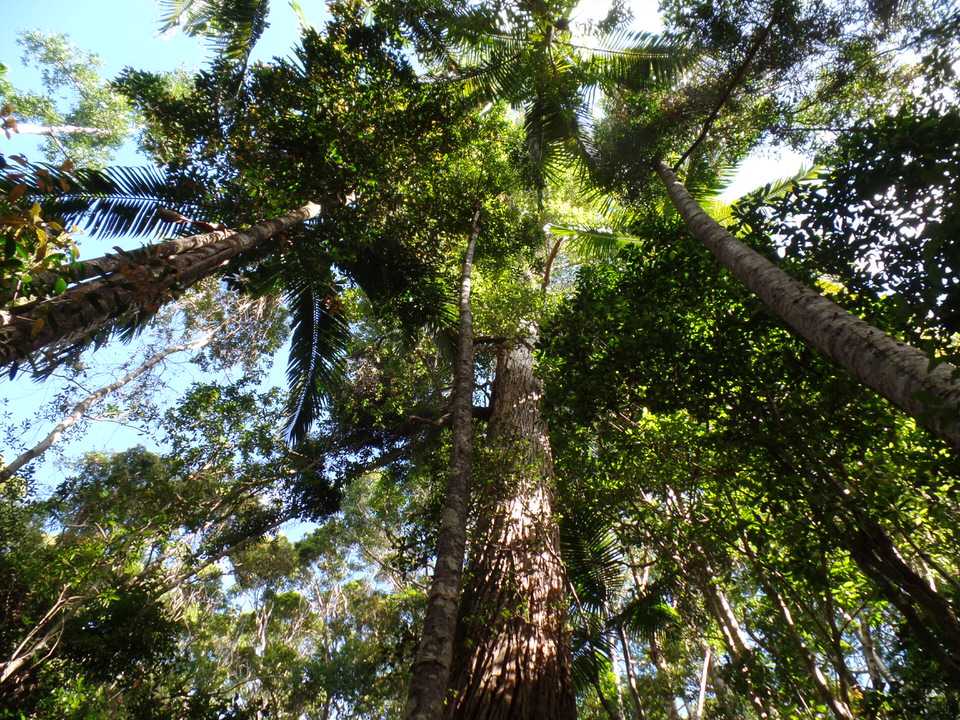 The Maheno stranded on Fraser Island in 1935 due to rough sea. It had already been declared outdated by that time, but back in the days it had been the fastes steam cruise ship besides the Titanic. So it has basically laid there on the islands beach forever, because the inhabitants of the Fraser didn’t know, what to do with it. When the wreck was still in shape, some locals where getting married on it, until during World War II the government allowed military forces to do bombing tests on the ship. This time luckily is over. So you can still enjoy its somewhat mystical and on the same time tragic appearance. 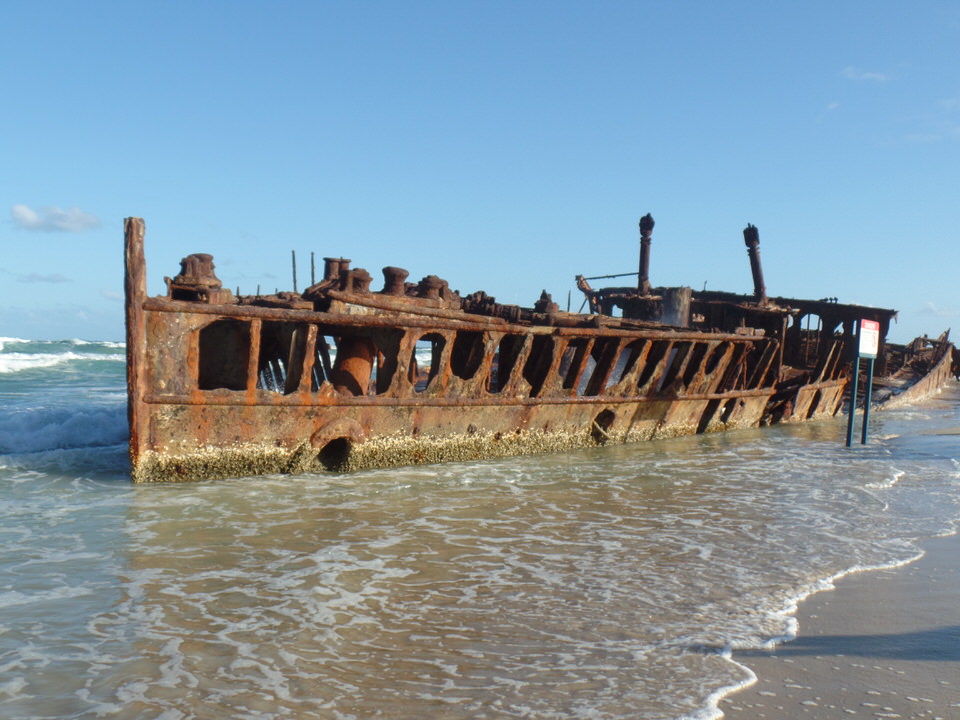 Girls like diamonds and they also like champagne. But bathing in the natural Champagne Pools on Fraser will sure be fun for both sexes! Holes have been digged into the sand, which then filled up with water from the sea, because only some rocks separate them from the ocean. So if you stand in the pools and a powerful wave hits the rocks you will be surprised and refreshed, when a whole lot of water is washed in at once. A sparkling pleasure! 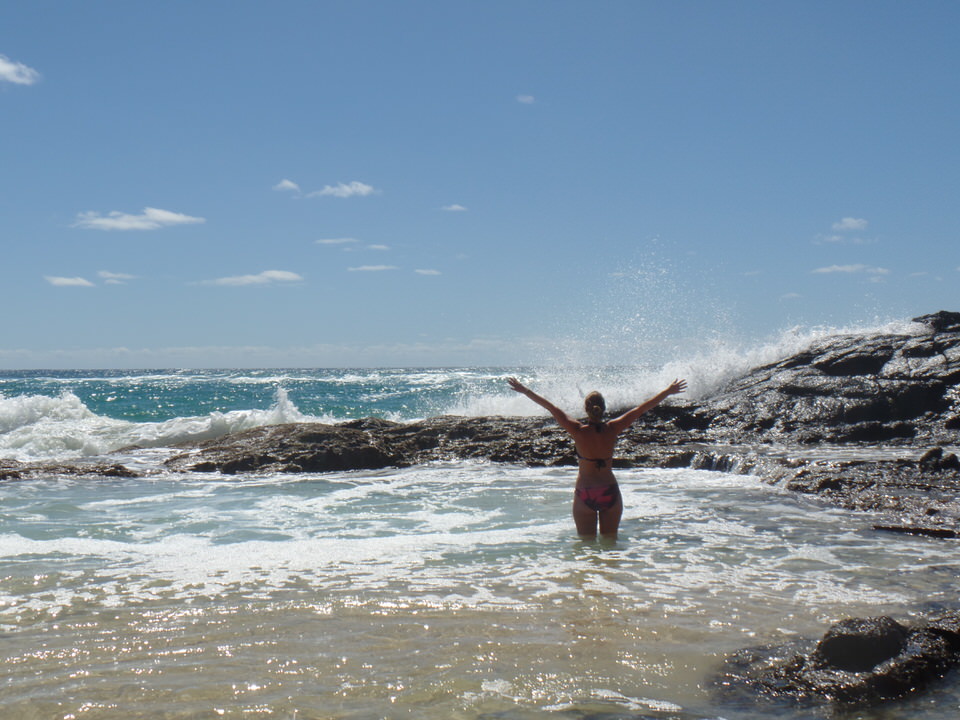 From this high cliff you have a scenic view of the wild beach and the sea. Watch out for manta rays, dolphins and sharks (still haven’t seen the last ones). 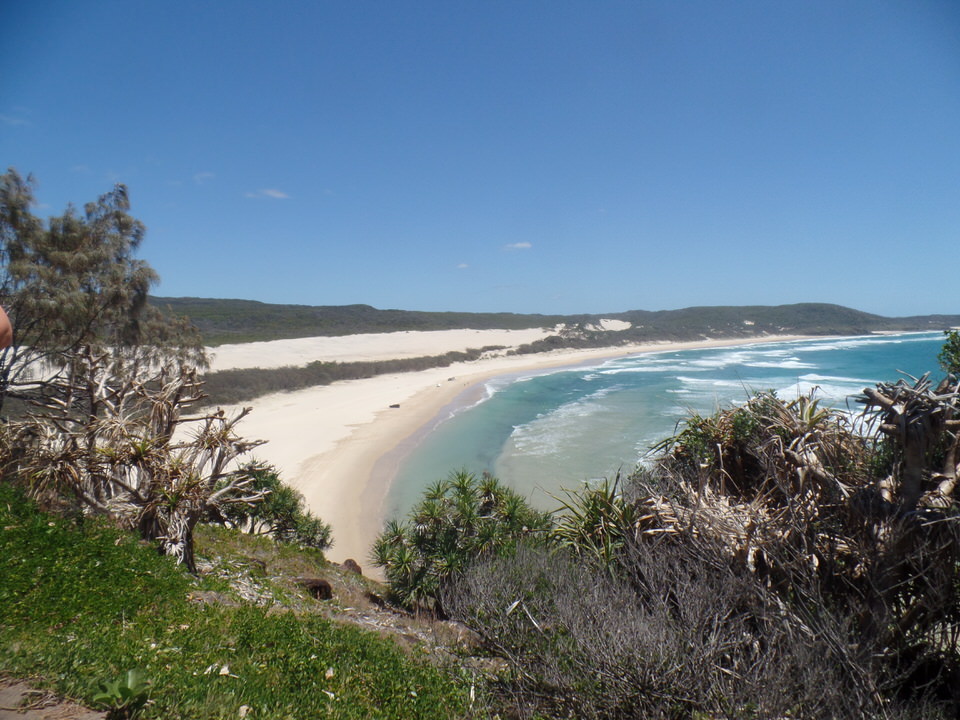 Grab a bodyboard or a swimming noodle and just float on Eli Creek. There are parts where the water is so flat, you will touch the sandy ground with your butt or belly – but never mind, you will get better every time you go for the next round. Some people also just like to walk through the water stream with a cool drink in their hand or relax at the end of the creek. 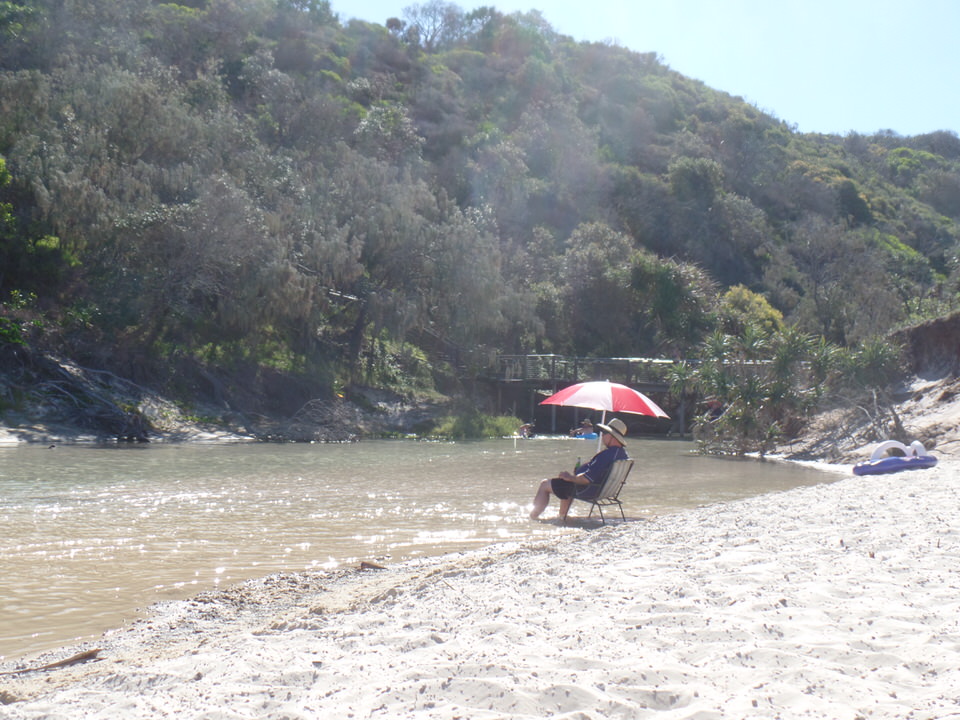 Lake Allom is a very peaceful place, when you are only there with your group. The water seems to be hot and cold at the same time, depending on which parts are getting heated up by the sun. Before going in, sit on the wooden stairs and let your feet be cleaned by small tea tree lake fishes. They eat away the hard skin. 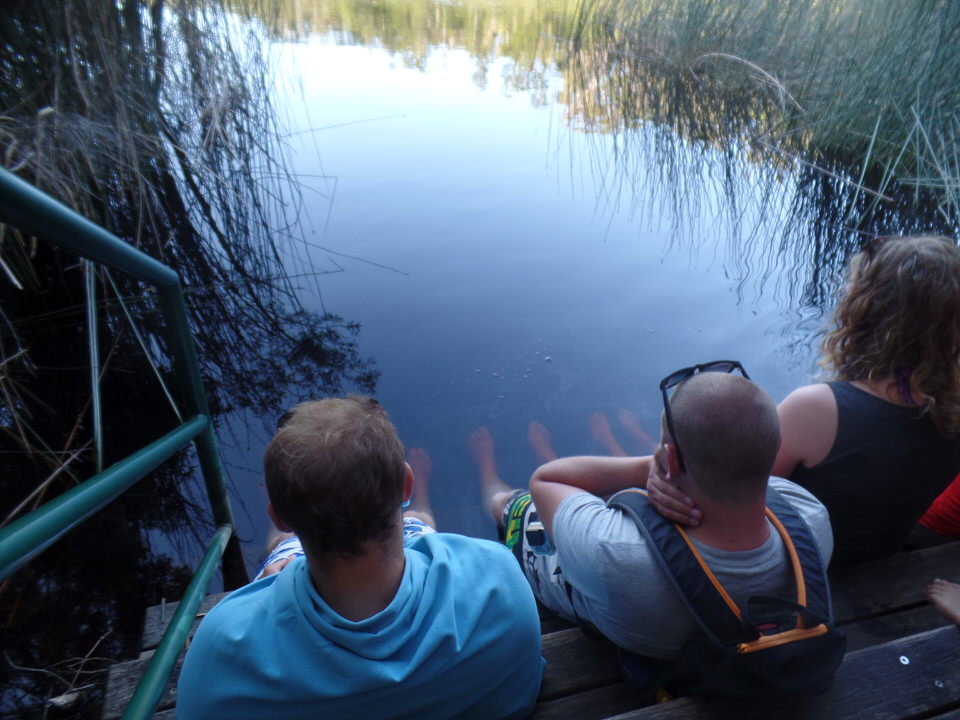 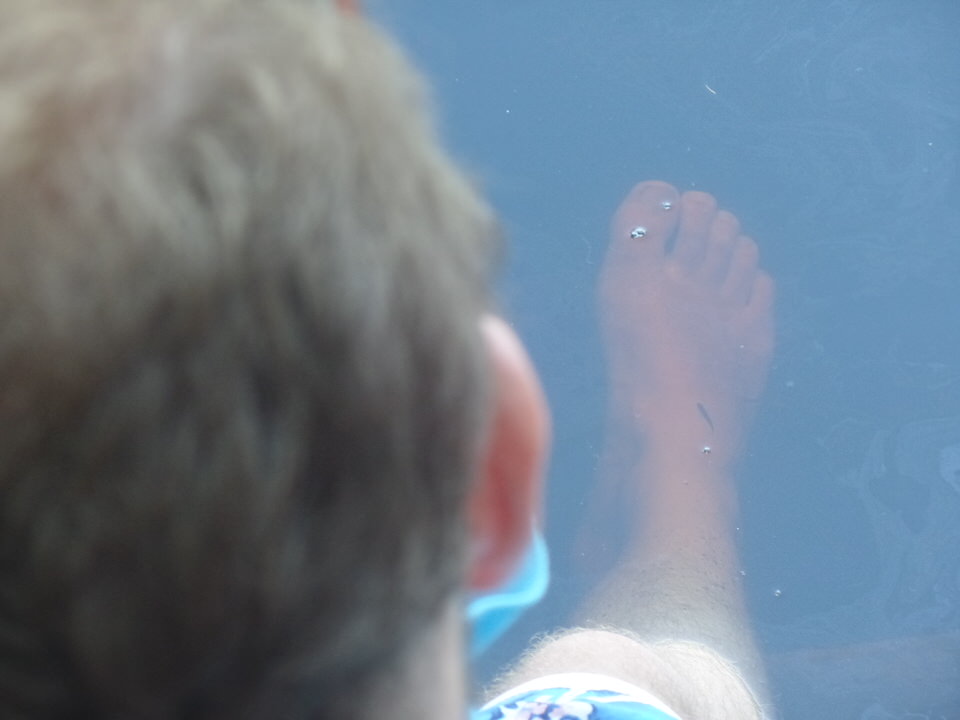 Its quite a walk to get to Lake Wabby, but its worth it. You march on soft sand, through the forest and mainly up the hill, until you are standing on a huge sand dune, that will remind you of the Sahara. At the food of the dune lies the peaceful lake with some pretty big fishes. On hot days you will want nothing more than get into that water to cool down after your ‚exercise‘. 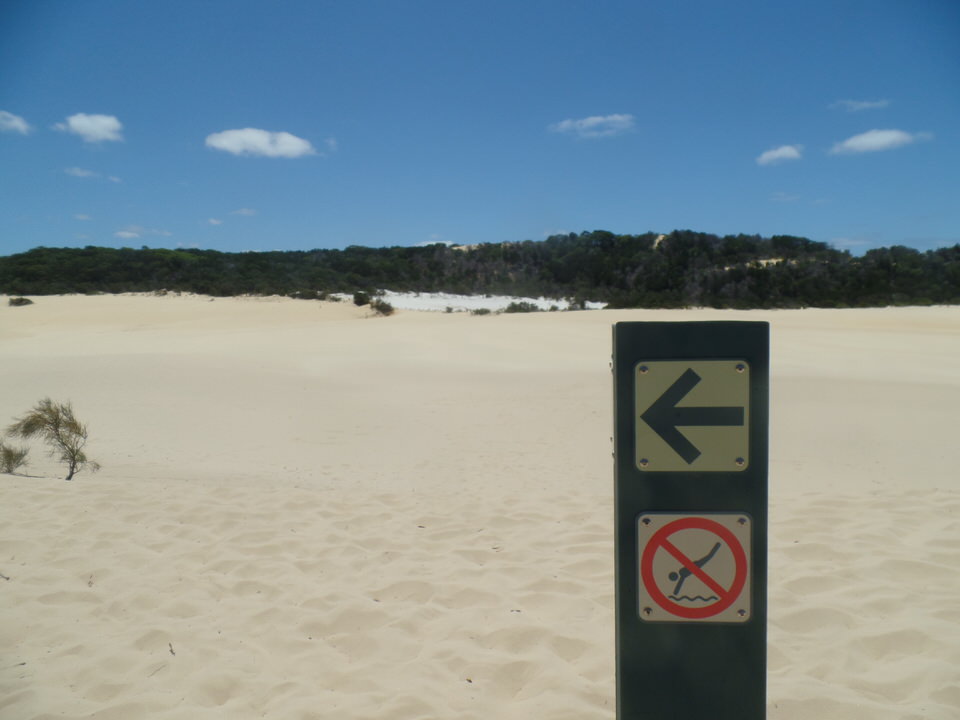 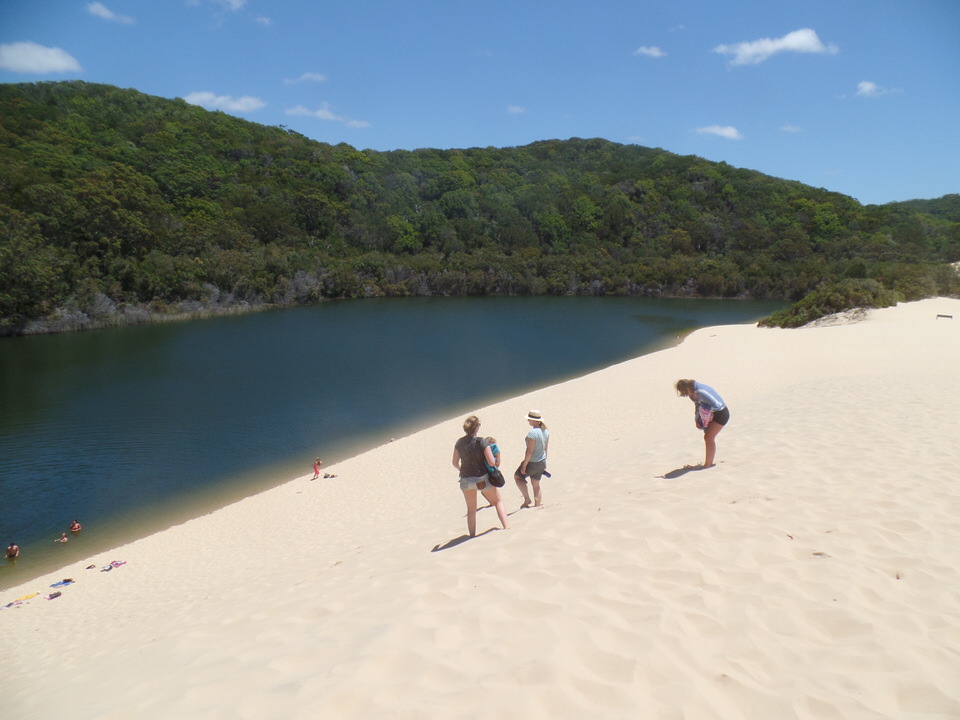